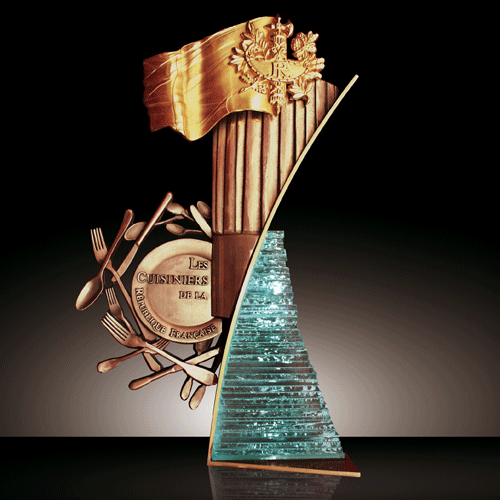 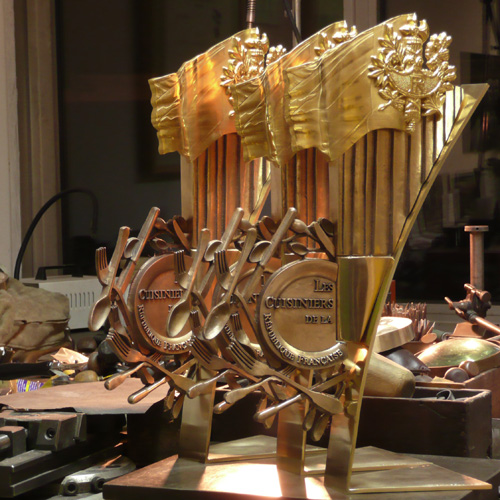 The working stages for the design and making of the trophies.

Once the design of the trophy has been developed and approved by the « Cuisiniers de la République Française », I sculpted the various elements: the piece of chef’s hat, the plate and the cutlery spinning around and the seal of the French Republic with the French flag.
These pieces are carved from the block, digitally roughed out and hand finished.

As soon as they’re finished, the pieces are passed on to Saint-Sauveur, Bruno Redoutey’s foundry, in the Hauts-de-Saône. They’re going to be made of bronze using the sand casting and lost wax casting techniques. I thank them for that, because of the short timeframe – to say the least.

the preparation of the smelted pieces, the deburring, the thickness roughing (in order to minimise the final weight), the fitting, the drilling and the tapping of the attachments and the preparation for polishing. Meanwhile, the shaping of the trophy’s stand structure out of a brass plate: cutting, mitre cutting, creating the right curve for the stand with a rolling machine (thanks to Julien Puy, master craftsman in wrought iron). And then, the silver-brazing of the piece with its stand (thanks to Aurélie Masselin, master chiseller – Atelier Les Miniatures de l’Once d’Art : link).

Fourth step: the polishing and the assembly of the pieces. The gilding operation of the three pieces of the seal and the flag will be carried out by the Maison Montibert-Auscart. All the pieces are fitted together and fastened to the stand.

The last and fifth stage: the cutting and the fitting of the glass elements to finish the piece, waiting to be delivered on Monday, just before it’s handed over.

I wish to thank the craftsmen mentioned above who were involved in this project with me. Thank you to the association the Cuisiniers de la République Française for trusting me and a special thank to Guillaume Gomez, cook, MOF 2004, who works in the kitchens of the Elysée Palace.

The association Les Cuisiniers de la République Française was created in 2011 under the high patronage of the French President, of the Ministry of Culture and of the Ministry of Agriculture, in order to promote the work of the women and men who receive, serve, and feed everyday the representatives and guests of the French Republic. The founders are: Bernard Vausson, Honorary President; Guillaume Gomez, President; Gilles Poyac, Vice-President and founder; Christophe Langrée, Vice-President. The aims of this national association are:
• to promote the great gastronomic traditions of the French cuisine (recognized by Unesco), in France and abroad;
• to gather the cooks who work daily for the French republican institutions in France and abroad;
• to support actions aimed at promoting the French gastronomy. 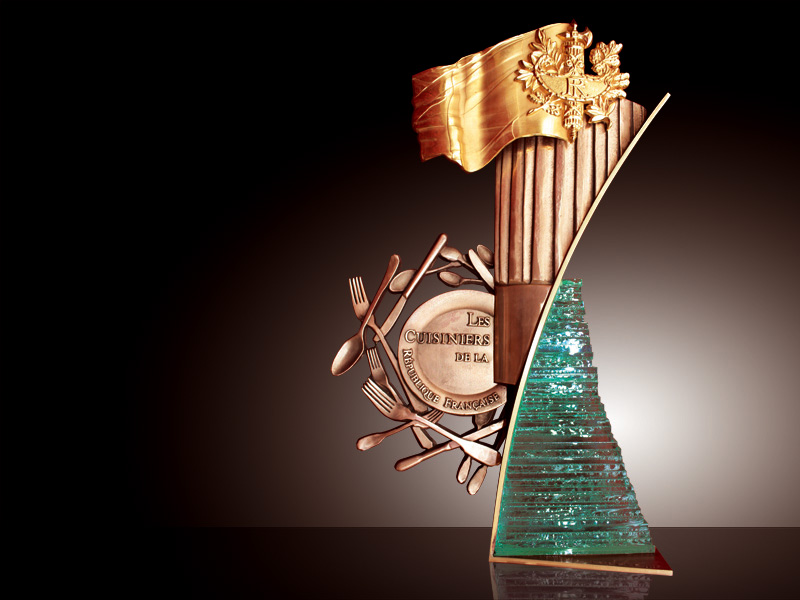 Thus, the creation of a national event to help uniting and promoting the French cuisine was vital. So the Cuisiniers de la République created the Challenge Culinaire du Président de la République.