Based in Lyons where the first French medal was struck more than five centuries ago, as an engraver and medal maker, awarded Meilleur Ouvrier de France in 2000, I strive to keep my expertise and its values alive. I discovered this unusual profession more than 25 years ago when I followed my grandfather’s footsteps and enrolled in the Ecole Boulle to become a cabinet-maker like him. But, as it turned out, it was the steel-engraving workshop that fostered me. A passion was born and I started to learn this little known craft. Today, in my forties, young ‘heir’ of a vanishing know-how, I provide prestigious and forward-looking references.

My grandfather told me: ‘When you grow up, you’ll go to the Ecole Boulle’. And so, when I was 15, I went along to this prestigious school. I thought I would become a cabinet-maker like he did. However, as it turned out, it was the steel engraving workshop that fostered me. I met there Pierre Mignot, my master and workshop teacher. He immediately aroused my curiosity and paved the way for my future occupation. In these 5 years of training, I was taught the basics and the tools of the trade. I still had to confront them with the realities of the working world. My diploma creation. Subject: ‘Create a piece evoking a european country’. I chose Norway because of its beautiful and strong landscapes: glaciers, fjords, ice and water.

From October to November 1989

Trainee as a jewel designer at Cartier Haute Joaillerie – 13, rue de la Paix – 75001 Paris. Jewelry design department.
During my training, I learned as an intern to draw jewels and achieve paintings with gouache.
I was a very rewarding experience and I was allowed, thanks to my internship master, to meet every person involved in the making of a jewel. I wanted to understand how my drawing could transform into an effective jewel through its journey across all these fine crafts: stone-cutters, stone-polishers, stone-setters, jewellers, diamond merchants…
I want to express my gratitude to Mr Corentin Quideau, director of Cartier Haute Joaillerie; to all the jewelry design department and Cyril Conrade for their warm welcome and teaching.
Here, a personal study build upon an emerald, for a necklace and a bracelet. FIA Company (subsidiary of the A. Augis firm) in Lyons

At the FIA (subsidiary, of the A. Augis firm in Lyons), I worked as an engraver and I was in charge of the engraving workshop. In april 1994, I left the capital and headed for Lyons to take Mr Jean Redon’s position who was about to retire; he was 60 and I was 25. We only had two months to see each other, that was too short –but this how it goes nowadays.
During nine years, I’ve taken part with Michel Rocci, engraver, in the design and making of over 5.000 dies (obverse and reverse):
– the medals ‘Passage à l’an 2000’, ‘L’Assemblée Nationale’, le porte-avions ‘Charles-de-Gaulle’, etc.
– temporary Euro medals for cities: ‘Saint-Pierre d’Oléron’ (awarded Best Euro in the year 1996-97, ‘the Centennial of the Basilique de Fourvière – Lyons’, etc.
While at the FIA, I met Claude Gardot, an engraver and medal maker, Meilleur Ouvrier de France in 1972, whose brother was Jean Gardot, sculptor and academician. He was hired by the FIA to design and make exceptional medals; I remember the medal for the President Jacques Chirac, temporary Euro medals for cities, the Bethune medal and many others. When he would show his engravings, I was feasting my eyes on the subtlety of his work, the quality of his modeling skills, the details and the textures. He was definitely an example and a role model. Thank you, Claude. One of the Best Craftsmen in France, in 2000

It took me three years of hard work… after my day job, during my week-ends and a portion of my vacations. I have to thank Mrs Sylvie Reig, FIA CEO, for allowing me to work inside the company’s premises outside office hours.
In September 2000, I handed my works over to Pierre Pignat, commissioner for the MOF du Rhône competition. I was proud to deliver my work timely and I knew I did my best… but will all of this be enough?
In November 2000, I was told that I was awarded the title of Meilleur Ouvrier de France by my peers. Plus, I was the one and only laureate for the en modelé engraving category.
March 13rd, 2001: the seven ‘Meilleurs Ouvriers de France’ in 2000 met with the French President, Jacques Chirac, at the Palais de l’Élysée, to receive our medal from his hands.
Many thanks to Mr Bernard Turlan, master engraver from La Monnaie de Paris who taught me so much; and Mr Claude Gardot, MOF, steel engraver. March 13rd, 2001: the seven ‘Meilleurs Ouvriers de France’ in 2000 met with the French President, Jacques Chirac, at the Palais de l’Élysée, to receive our medal from his hands. May 16th, 2006 : Minister Renaud Dutreil awarded me the First National Grand Prize of the SEMA* for traditional crafts –professional, period 2006.

Knight of the Order of Academic Palms

Mr Prime Minister, by the decree dated November 1st, 2010, awarded the title of « Knight of the Order of Academic Palms » to Nicolas Salagnac, for his service to the National Education.

On November 25th, 2011, three Meilleurs Ouvriers de France of the Rhône region receive the Academic Palms at the Chamber of commerce and industry of the Rhône-Alpes region, at the invitation of its president Mr Jean-Paul Mauduy.

The recipients and their guests were warmly welcomed.

Sylvie Razzini, secretary of the MOF du Rhône’s Office, wrote an article (in French) about this event.
Photographs by Michèle Wolff. President of the en modelé engraving – heraldry class, of the group XIII : Engraving

The 25th « One of the Best Craftsmen in France » competition is open since February 6th, 2013. For this new contest, Pierre Rodier, Engraver General for the Monnaie de Paris, now retired, and president of the en modelé engraving class since 1998, proposed me to the COET as his successor. The COET and the Ministry of National Education granted my application. Together with a jury of engravers and colleagues, I am commited to fulfilling this assignment: to make our fine crafts known and to spread its values.

Read more about the MOF competition on the COET website.

The 25th "One of the Best Craftsmen in France" competition

Nicolas Salagnac named Knight of the National Order of Merit 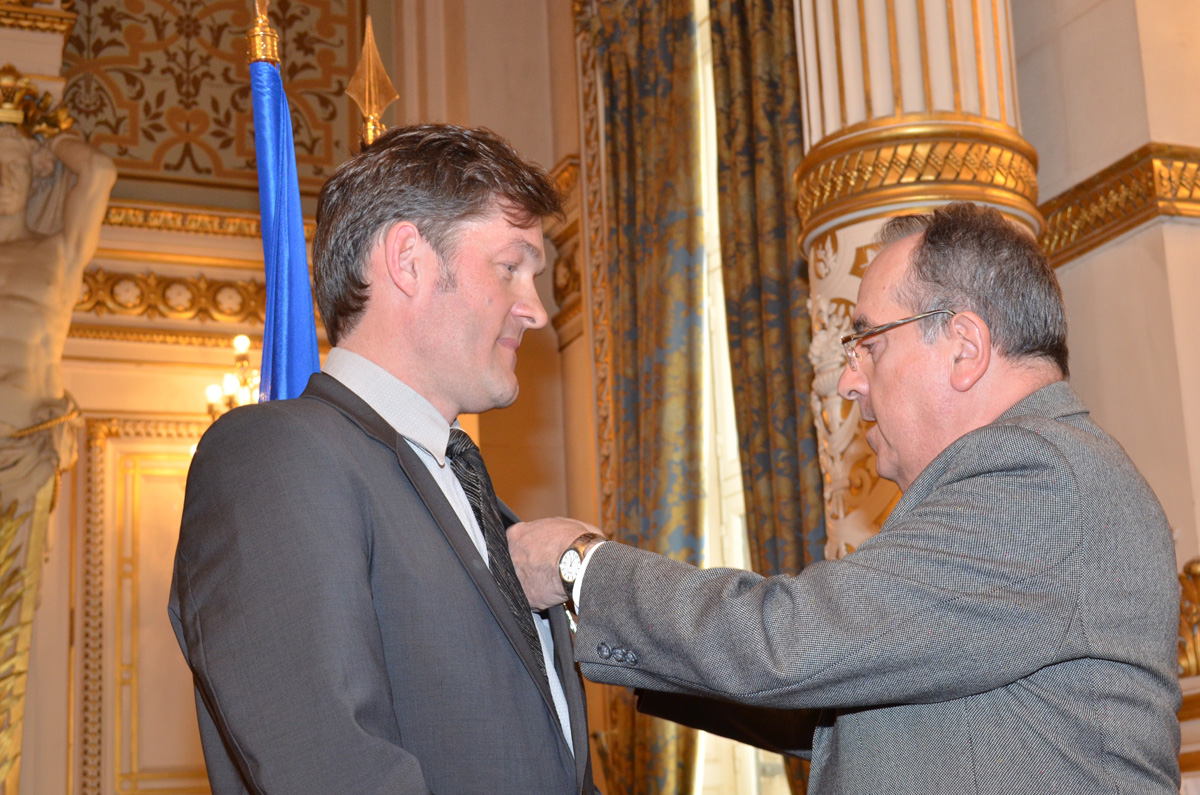 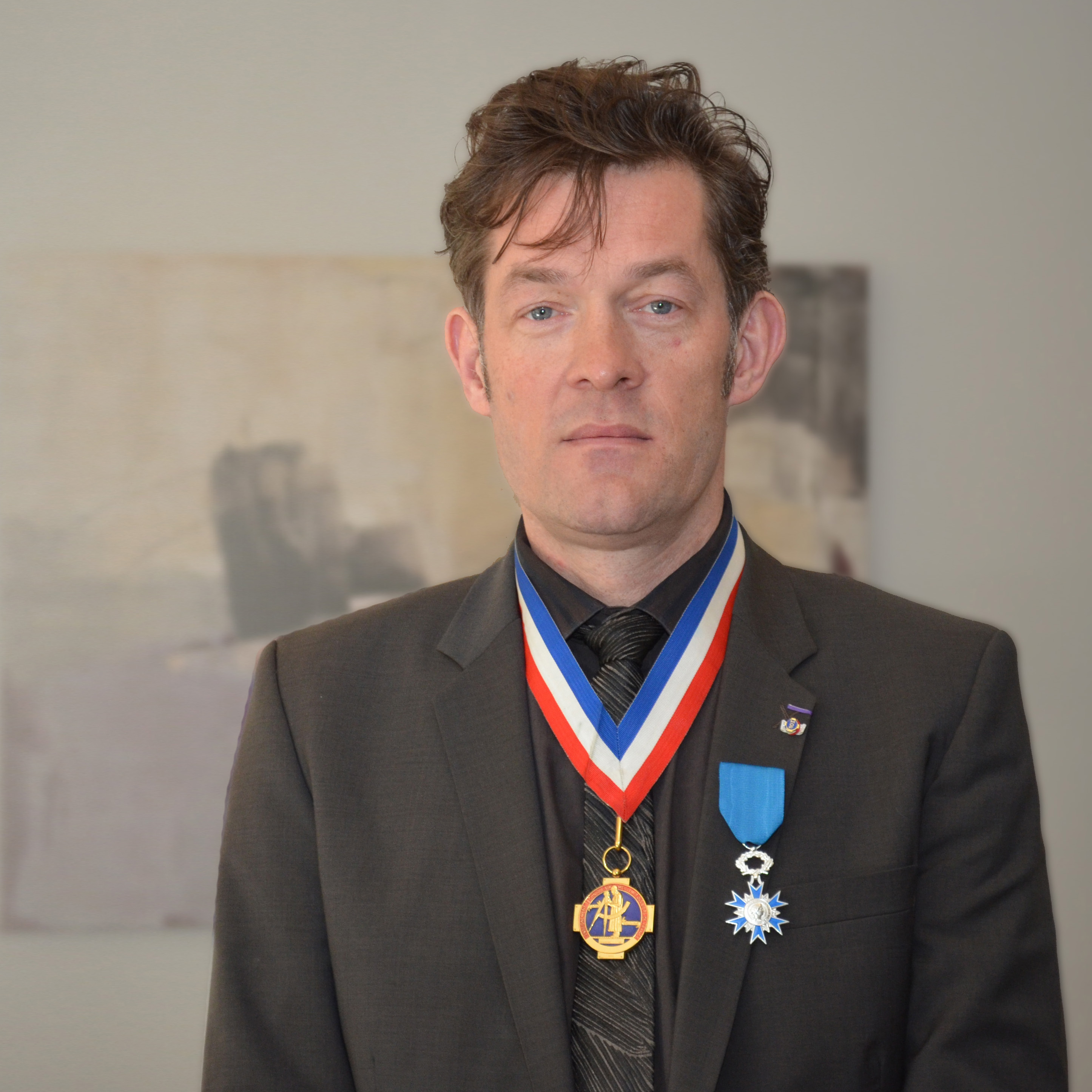