A few films about my work as an engraver and medal maker ; interviews about my career, follow-up of my creations and works for the « Best Craftsman in France » competition…

Creation of a medal diameter 80 mm, obverse and reverse modeled, struck in bronze, white silver patina for the anniversary of the company Cast Sofware, with the teams of Vincent Delaroche. Thank you for this creative collaboration and for the trust you have placed in us for this project. And happy birthday! 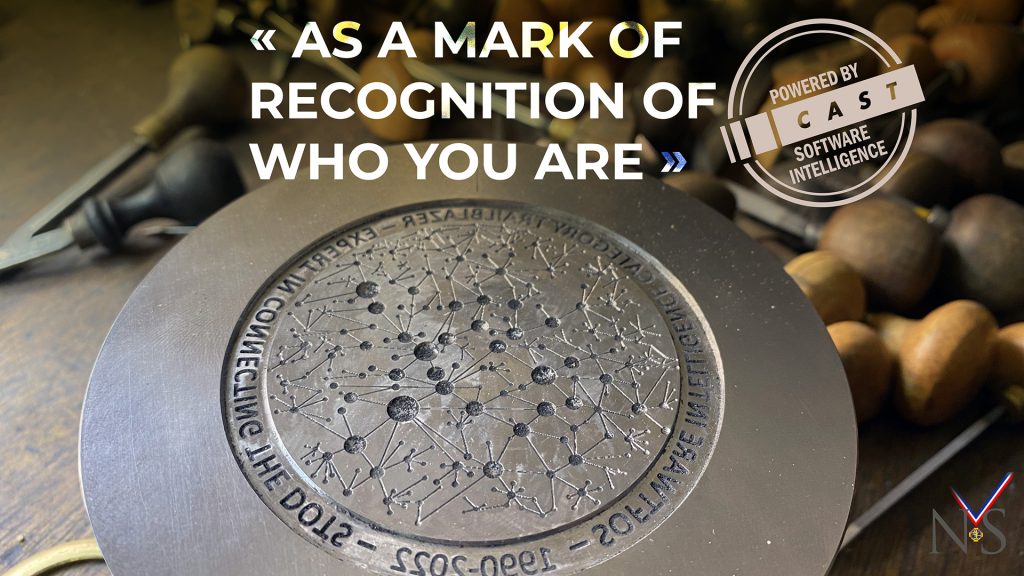 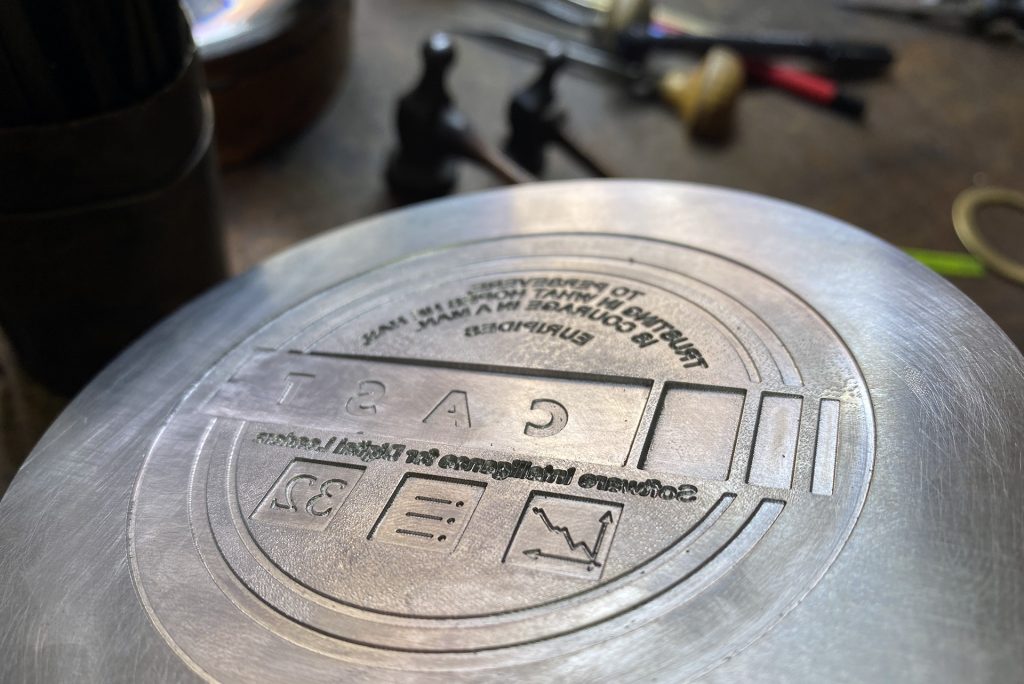 « I had the opportunity to work on the design and realization of a company medal with Nicolas Salagnac, engraver and medal maker in Lyon – France. Mr. Salagnac is not only « Meilleur Ouvrier de France », he is also someone who knows how to listen, imagine and transcribe a message. At the same time, he is a master craftsman who excels technically in his art of medal making, with a creative and intelligent spirit.
The project was completed on time, at the right price, and the result exceeds our expectations. What more could you ask for?
Here, more than a simple recommendation, I invite anyone who has a similar project to realize, to take the time to speak with Nicolas Salagnac, the French reference in the field. »

The 36th International Congress of FIDEM (International Federation of Art Medals), in TOKYO Japan, has just ended. Thanks to the Japanese team for the organization, for the exhibition of medals from all over the world and for the conferences on the art of the medal.

For my part, I was happy to contribute with a conference on:
Oscar Roty, the Oscar Roty Foundation and, in conclusion, a problematic: « So tomorrow, the art of the medal, an art or a technology?

European Crafts Days – JEMA
From 6 to 11 April 2021: Discovering the craftsmen of art – video, podcasts and program.

Video recording in my workshop, to make you discover my job as a medal engraver, duration of 2 mn 14.
Thank you to the organizers for the valorization of my trade of engraver medallist within the framework of its particular JEMA 2021 under confinements…

Medals of the Knight

A small movie of 2mn15 about my engraver’s job medalmaker, thank you Pierrick Servais.

For the third year, Marcy Leavit Bourne, director of the Student Medal Project competition for 24 years, gave the French students the opportunity to challenge one more time, thank you.
Thanks to schools, teachers and students for their active participation. Medals has been send now to British Museum in London.

To see the long version with the 9 students :

The Royal Saltworks presents a festival of the gardens the theme of which is renewed every year. Several gardens in the infinite variations of forms and colors surround the buildings which make from now on of this festival one of the most famous of Europe.
This good name comes from a cooperation carried all year round in connection with about fifteen schools which make gardens a work shared with all the pupils and their teachers.
All the formations of the high school Ferdinand Fillod driven by Aurélie Masselin, professor bronze-smelter of art, gets involved for 7 years now with passion and enthuses.

Nicolas Salagnac makes knight of the national Order of the merit

The Prefect of the region Auvergne Rhône-Alpes, Michel Delpuech puts hands the medal of the National order of the Merit to Nicolas Salagnac, 3 Mars 2016, in the prefecture of the Rhône, surrounded with his family, with MOF, with friends, and with collaborators… Thank you.
Video of my brother Pierre Salagnac, thank you.

10 French pupils engravers and sculptors of the Jura high schools Ferdinand Fillod: the metal arts of Saint Love and Pierre Vernotte: the woodcrafts of Moirand in Mountain ended their creation in medal to be February 12th, 2016 in British Museum, in London for the 23rd international competition « Student Medal Project ».

The medal prize-winner 2016 for the 23rd Student Medal Project: Romane Cossin with her medal tribute to Gotilb.

Thanks to the pupils engravers and bronze-smelter of art of the LP Ferdinand Fillod: Metal arts – 39160 Saint -Amour: site.

Thanks to the professors and the pupils of the Lp Hector Guimard-69007 Lyon: site.

Two stamps gaufrés for the French Southern and Antarctic Lands, for 60 years of Fillods.

60 years ago, Ferdinand FILLOD creates and installs metallic constructions (famous « Fillods ») on the islands of the French Southern and Antarctic Lands to shelter scientific expeditions.
Nicolas SALAGNAC, engraver medalmaker – MOF, in Lyon saw entrusting the engraving of two matrices on this subject by FRENCH SOUTHERN AND ANTARCTIC TERRITORIES, to print by post of Périgueux, complete stamps in embossing.
» Pierre ALBUISSON Artiste – Draftsman – Engraver Master MOF and councillor at the committee of the philatelic programs of FRENCH SOUTHERN AND ANTARCTIC TERRITORIES had the idea of this first stamp in embossing – medal during the philatelic demonstration and the demonstrations of the various techniques of engravings to Mâcon in 2015. He suggested me after agreement with Marc BOUKEBZA making the creation and the realization. «

Thanks to Pierre ALBUISSON and Elsa CATELIN, engravers of stamp, for their advice and supports. And thanks to Marc BOUKEBZA, his team of FRENCH SOUTHERN AND ANTARCTIC TERRITORIES and in the post office for the trust which they carried me for this original work.

On July 28th, 2014, Benoît VIOLIER, MOF cooks in 2000 and leader of the restaurant  » Hôtel de ville  » of Crissier in Switzerland, asks me to work on the creation of a trophy and a medal for the first competition Joseph Favre ( Swiss culinary competition) for the Swiss delegation of the Culinary Academy of France.

These five trophies and these medals took time and a work of collaboration of 4 « Meilleurs Ouvriers de France » : Emmanuel Galmiche, MOF on 2004 in foundry of art; Bernard Frizza, MOF on 1997 in silversmith’s trade and responsible for the Silversmith’s trade Montibert in Lyon; Pierre Pignat, twice MOF in 1955 and 1991 in scientific and artistic glass factory; and myself.

And thanks to all the  » small hands  » for their collaboration in the finalization this beautiful project.

Portrait and Nicolas SALAGNAC’s discovery, engraver medalmaker, Best Worker of France, creator of medal in its account in Lyon. A movie writes, realized and gone up by Susanne SCHUBERT in 2011.
This movie is realized within the framework of the workshop of realization of the 5th year of university preparing to work for a company « Distribution of Arts and the Knowledges by the Image » of the University Light Lyon 2. Under the look of Remi FONTANEL and Laurent Charles, at the request of CAP CHANNEL and under the coordination of Nathalie BERGUERAND, director of CAP CHANNEL – on 2011.

» Nicolas, engraver « , Barbara Bégot’s movie for TLM, realized by Octogone production in 1997 – 1998. It makes 20 years. I am in the period at the beginning of the competition « one of the Best Workers of France » and responsible for the workshop of engraving of the house TRUSTED (subsidiary of A. Augis) to Dardilly, thanks to TRUSTED to have allowed this shooting. Thanks to the Museum of the Fine arts of Lyon, François Planet, thanks to the establishments Levallois ironworks to Craponne…

The quality of this movie is average, because it comes from a old recording on VHS… But for lack of having better, I show it to you as is.

Businesses, and training involved in this luxury sector, the LP Ferdinand Fillod with its goldsmith workshops in crafts: Bronze Frame / Chasing and engraving modeled: 9 minutes on a film 14 minutes.

Little film from a first in France, for the 22nd Student Medal Project.

The engraving of a medal for the 2012 Ironman race

I was asked to engrave a medal for a video clip about the 2012 Ironman triathlon race. Direct carving from a bronze piece. A few hours of shooting late into the night with a great team. The idea was interesting: drawing a parallel with the athletes putting out intense physical efforts and myself working hard on the medal one of them was about to win, even though my own efforts weren’t exactly comparable.
I was pleased to get involved in this film which has been very successful and even won an award in the Sportel of Monaco.

« The Rape of Proserpina » by Bernini inspired the engraver Salagnac

This film describes the creation stages of the making of a medal inspired by a detail in a sculpture from Le Bernin, « The Abduction of Proserpine by Pluto ». The work started at the Nicolas Salagnac Workshop and was continued at Pichard-Balme, the striker. I feel very grateful for the Pichard-Balme workshops to take us behind the scenes – that is, the stages of the striking of a medal. And thank you so much, Fabien, for your involvement in my works and my craft.
Directed by Fabien Marmillod.

Interview of Nicolas Salagnac from the Grands Ateliers de France, « Opus in Fide »

Interview of Nicolas Salagnac, engraver and medal maker, Meilleur Ouvrier de France, during the annual reception of the Opus in Fide network at the Automobile Club de France’s, on June 6th, 2011.

I filmed during my three years on the MOF competition

After my 35 hours in the evening, at night sometimes, some many weekends and during certain holidays, I filmed for three years on my steps for the MOF competition, subject to imposed after Vigee-Lebrun drawing.

For more information, see the article on my spare MOF competition : link.

Paul Belmondo, sculptor and engraver medal of the Academy of Fine Arts

Link to this report on the website of Canal Académie, Academicians and the Institut de France on the internet : link

« Étincelles ». A film about the training of arts metal, LP Fillod Ferdinand de Saint-Amour – Jura, Alexandra Santander and Didier Boyat of: Sueño in the Fábrica.

It is vocational school of metal Fillod Ferdinand de Saint-Amour Arts – Jura, Alexandra Santander and Didier Boyat of: Sueño in the Fábrica residency artist, come to meet teachers and students. The first present workshops and various training and the second evoke enthusiasm discovery trades metal and commitment to artistic creation it allows.

Message from Philippe Meirieu sciences professor of education at the University Lumière Lyon 2 , Vice -President of the Rhône -Alpes delegate « à la formation tout au long de la vie » : « I am particularly pleased that the Festival ‘ Evreux chose to distinguish the film « Sparks  » I know investment vocational school , its teachers , its educational settings and students to make this document that says so forcefully the importance of demanding training gesture just in a  » pedagogy of the masterpiece . » They show how vocational training can bring intelligence to incandescent they shatter the old and absurd categories that oppose the « manual  » and  » intellectual  » they appropriately point out that the functional value and aesthetic pleasure do not oppose but converge in the symbolic , they perfectly illustrate the famous formula of the Greek philosopher Anaxagoras :  » man thinks because he has a hand. »

Sueño in the Fábrica is an original sound concept of strong identity experienced in brownfields and developed on stage with many artists and musicians, but also with scientists. His shows are presented in many countries every year with original music and many multimedia entertainment between Art and Science.