A work based on a detail of The Abduction of Proserpine

Medallion based on the sculpture by Le Bernin, "The Abduction of Proserpine". Diameter 440 mm, burnished bronze on a crystal slab, presented on a base.

Detail of a medallion based on the sculpture by Le Bernin, "The Abduction of Proserpine". Diameter 440 mm, burnished bronze on a crystal slab, presented on a base. Medallion carved in bas-relief and struck in burnished bronze. This piece is based on a detail from a sculpture by Le Bernin, The abduction of Proserpine by Pluto, presented in the Villa Borghese, in Rome.
This bronze test piece –lost wax process, reworked by hand– sits on a base. It is carved to the rules of the medal engraving tradition, in order to produce a die for the striking of 140 mm diameter medals.
The diameter of the carved bronze piece is about 44 cm, and the piece is numbered « 1/8 » on the edge. Overall height (including the base): 70 to 80 cm. Total weight: 7 to 10 kg. Value: 7,500 euros, excl. VAT.
The bronze sculpture, on a crystal slab, in a limited edition, numbered « 1/8 » on the edge. Value: 11,000 euros, excl. VAT.

Personal work based on a detail of a sculpture by Le Bernin.
It all started with a poster I had seen when taking a sculpture course, in Lyons: a striking detail, strong hands upon delicate and sensual flesh, accomplished with power and energy, and it still moves me today. « The Abduction of Proserpine » is a sculpture by Gian Lorenzo Bernini dating from 1622. He was only 25. Carved from marble, that remarkable sculpture is impressive. Carefully honed details, materials abound, the situation is full of vigour and it brims over the limits of the piece. Yet the moment is set in marble but one can see the story being told; this moment gives birth to the seasons…
Indeed, in the Roman mythology, Proserpine, nymph and only daughter of Jupiter and Ceres, goddess of Nature, was picking flowers with her friends when Pluto, god of the Underworld, took hold of her, driven by lust. He is without restraint and acts as a predator. The features of his mouth, hair and beard show how furious his desire is. In opposition to Pluto’s attitude, Proserpine is tearful and frightened, she tries to resist from the mighty fingers but can only turn aside.

As Ceres looses Proserpine, she neglects Nature and sets off in search of her daughter. She eventually negotiates with Jupiter and manages to have her daughter back from the underworld every six months, hence our seasons: spring and summer when she returns with her mother, autumn and winter when she joins Pluto.
That sculpture moves me a lot and that only mythological detail is so beautiful and expresses so much about Man and Woman.
It was far from simple to convey this image in a bas-relief, to achieve the transitions, the anatomical details while preserving the essence of Le Bernin’s work. But the challenge gave me the energy  to bury myself into this creation.

The carving of a bas-relief

And then, a plaster print and a counter-print; I reworked the volumes, the details – upside down and right side up.

Over the course of this project, I was seeking photos of the sculpture in numerous books. But it was hard to get an accurate idea of the subtle transitions, of the volumes concealed in the shadows. I had to go and see the real sculpture, in Rome, in the Villa Borghese.
On August 16th, 2010, I walked inside the Villa Borghese to discover this work of Le Bernin. Nothing compares to seeing the original; it was so simple, so beautiful and powerful – what an emotion! It was like being in front of the « Victoire de Samothrace » sculpture, I could feel the same impulse, the same beauty.
Many thanks to the Villa Borghese for allowing me the chance to make such a special visit.
Back in France, in my workshop, I only had to resume my work and finish it.

Moulding of a plaster print, reworked to refine and provide as much expression as possible, with the volumes and the details of the sculpture. Once this working stage of the « negative » is over, I make a plaster print of the « positive ». Of course, the whole sculpture work is achieved « en dépouille » (drafted) to enable easy moulding and removal from the mould.

The positive piece from that mould is then reworked and refined. This job is long and precise but here comes the time to complete the personal work I had started over a year ago. 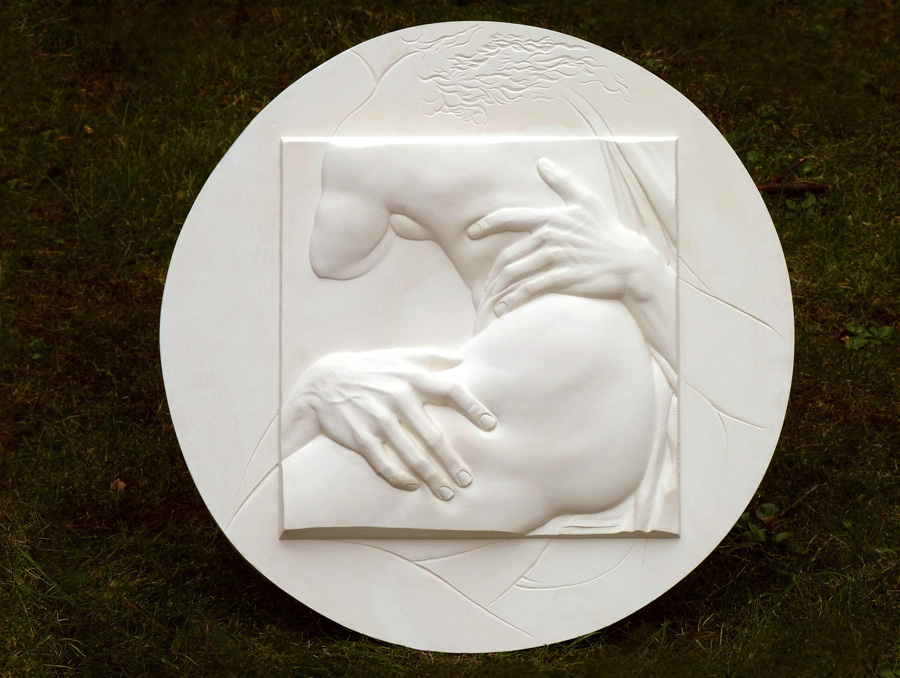 After a few more steps, I hand over to the founder, Maurice Adobati, who will take the print and remove the bronze piece.

The founder, Maurice Adobati, near Valence, in Ardeche

I hand the print to Maurice Adobati for him to develop a mould and produce wax models. These wax pieces are then assembled on a casting tree and swamped with plaster.

The liquid wax is carefully laid with a brush on the bottom of the mould, layer after layer, until a 3 to 4 mm thickness is reached. After that, the piece is removed (« tirée d’épaisseur »).

The wax pieces are placed inside the mould which is heated up to remove the wax and leave room for the metalNow the mould is ready and the melting of bronze begins in an oven. The temperature increases in a crucible until it reaches about 1040 °C, under the founder Maurice Adobati’s seasoned eye. Then, in a hot and tense atmosphere, he and his son take the crucible out of the oven and bring it over the mould.
One everything is set, the molten metal needs to be poured into the mould. At that moment, once the deafening sound of the oven stops, amid the puffs of smoke, the atmosphere is suddenly peaceful. The metal flows like milk, runs into the matter, making cracklings and other indefinable sounds.
Final step: the patina. The range is wide and there are many possibilities to provide depth and life to metal: oxidising, heating up, rubbing, and then watching the color while it changes and setting it. There, the founder shows his touch and makes the piece soulful.
Many thanks to Maurice Adobati for his invaluable professional input..

At the same time, we have been developing heat-resistant plaster moulds in order to melt a crystal slab inside. The crystal element merges with the large volumes of the sculpture. The extensions of the model are line-engraved (like steel-engraving) and reproduced on the moulded piece. Thus discreetly brought to life, this noble material shows great contrast with the carved metal.
Thanks to Gabriel and Beatrice Milesi for their responsiveness and expertise.

The making of the bases of the medal

In order to develop the stand for my medal, I left it up to my brother Pierre, bronze smith and sculptor, to make the bases according to my drawings. The metal is cut, the curves refined with a file, the flame silver-soldered on its base. Finally, the two rods holding the medal are secured on the flame.

Thank you, Pierre, for your help and your involvement in the project.
Now, as each craftsman is about to complete his part of the work, I’m left with the job of fitting together the pieces of the puzzle, fine tune it and finish it.

On October 21st, in Monaco, Her Royal Highness the Princess of Hanover met with the craftsmen of the Grands Ateliers de France. It was a very special moment, the exchanges were frank and meaningful.